15 replies to this topic

Team Canada/Toronto Raptors Crossover. White with red accents, size 56. This was originally a Flames 3.0 that was decrested. The Flames logo left some marks, but if you don't mind them its a nice piece. I had both crests sewn on professionally but the Raptors one was tough to do, so some of the edges couldn't be stitched and the middle of the crest had to be stitched instead. In perfect shape though. 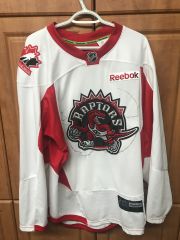 Dude these are amazingly well done! Congrats to Raptors fans by the way (the Warriors have been hogging all the championships, time to let someone else have a turn!)

"What's your best price?" is NOT an offer - Gr8erade

Haha thanks bud! I only did the raps one but definitely like the way it turned out. I know I’m late but still buzzing from the ship haha.

Ps these are still available if anyone is interested. If not I’ll prob just keep them...

anyone? make an offer

Back to Jerseys, Socks & Apparel - For Sale